Man, the flu sucks. Maybe like me you forget just how much it can wipe you out. Unless you had it recently and then, I feel ya, friend. Maybe it felt worse because I just started to feel better from that over a week long bout of vertigo or whatever it was that made the world move, the stairs difficult to maneuver and me ex-haust-ed.

I started feeling the flu Christmas evening, was up doing things I won’t mention 6 times that night and achy like I’ve never been before. Fever, chills, aches of the “don’t even touch my skin” variety. Bad bippy. After an all day sleep session (except for caring for our two puppies) the following day and some of yesterday I am feeling about 85%. Food does not sound nor smell good still. I force myself to eat brothy noodles and guzzle water like it’s going out of style. It was not food poisoning (or a baby for those who keep telling me all these illnesses are that) like I thought. But I will not be eating any of the foods I had Christmas Day maybe ever. Eggnog is out. The one thing I wanted and made sure to have on another one of our “alone Christmases” where we stuck around Minnesota. Yep, had that beverage ready but 2 small glasses, on 2 separate days, too close to countdown to Hurlville that night, and it’s out of my vocab for life. 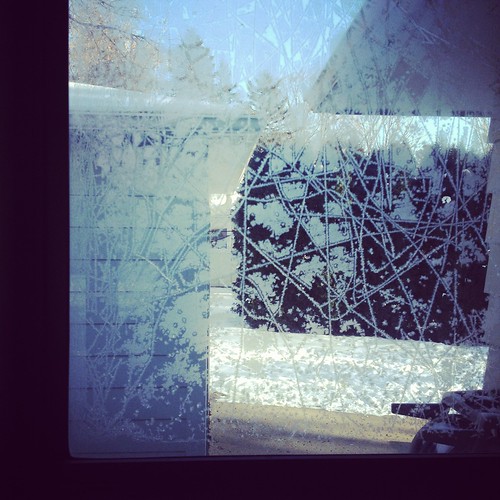 News (I didn’t know whether to call it good or bad but just “news” seemed to fit): Greg leaves for Kent, Washington (near Seattle/Tacoma) New Years Day for a 4 day trip to his company’s new facility. The one acquired with that purchase of their competitor I told you about (#11 in this post). The one we hope to be transferred to in a year or so. Fingers crossed. He’s going to look at their process to streamline/improve/etc.. They asked him about a week ago so not much advance warning. I tried to go but with boarding the dogs, tickets and all the extra costs it made more sense for me to sit this one out. I’m going to live vicariously through him. Although he doesn’t think he’ll be heading towards Seattle and just driving around Kent to get familiar. Still would be a vacation for both of us even if work is involved.

I’ve got Dayquil/Nyquil brain again (but am not sleeping in the yard this time) so things are foggy with the timeline I’m about to tell you. Greg also worked last Saturday which had me completely ass-backward. We went to the Tile Shop a week ago. I think. There was a cookie and sandwich involved from Potbellys which made me happy-floaty and tends to make me forget things on that cloud anyway. 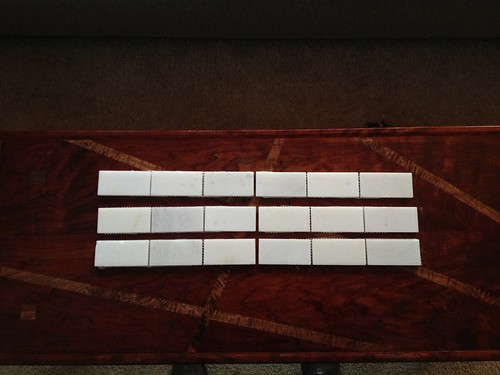 See, I ordered sample tile then went ahead, on the same day, and ordered the accent backsplash tile for the shower. Same stuff. Didn’t mention that to you for fear of looking stupid. There are several other reasons to feel stupid but I should have let that one out. After not receiving an email or invoice about it but being charged I contacted them and was told that a rep had been trying to contact me. Contact me by phone and email. Methinks the person a fibber about the phonecall but I did find 2 emails in my junk folder even though I received the sample order invoice by email with the same account I have with them. Ah, technology.

I know other bloggers who recommended the Tile Shop (should note they also were given free tile for their projects) and I was convinced this was a good company and to go for it. I still think they are decent but whoever the rep was on the phone was a phony fibber face. Just sayin.’ And I’m not too keen on the person who told her she called either which gives them 2 strikes. Anyway, they said they didn’t have that tile any longer followed by some confusing way of saying they might in February but then mixed that with wanting to know if I wanted the person to keep looking for it because they may never get ahold of it. Let me get this straight…I ordered the sample and the actual tile within an hour of one another, got the sample and loved it….but you don’t have it…maybe ever again and I was already charged. Mosaic marble tile is not cheap and we were going to use it as an accent among the subway tile (which we ordered from Lowes) to keep the cost down but still make it look classy. You bet I used the 10% off code from Young House Love. 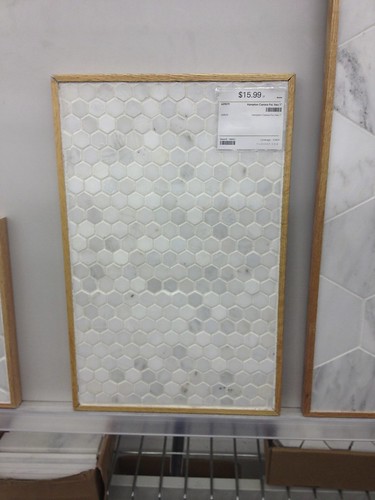 The very day I asked that they keep looking we went to Ikea to get this sink. The Talleviken. Home Depot and the Tile Shop were right there. Did a lookabout, saw that they still had the Lansdale marble version I had ordered but it was not on the shelf. I also noticed I wasn’t as fond of the Lansdale in person but huh because I got the Lansdale sample and loved it. Oh no, they di’int. But yes, my sample was not the one I ordered. Clearly. I canceled it the next day. But because maybe this was all some “most everything could go wrong scenario that’s abnormal for the company” I found the hexagon marble floor tile I and pretty much everyone remodeling their baths these days adore and decided to go for it when the time came. It’s beautiful. Thought I’d order it from them with that 10% off code and free shipping…until I found it cheaper elsewhere with great ratings and I am crazy about the sample I already received so I’m going that route. It’s on its way. 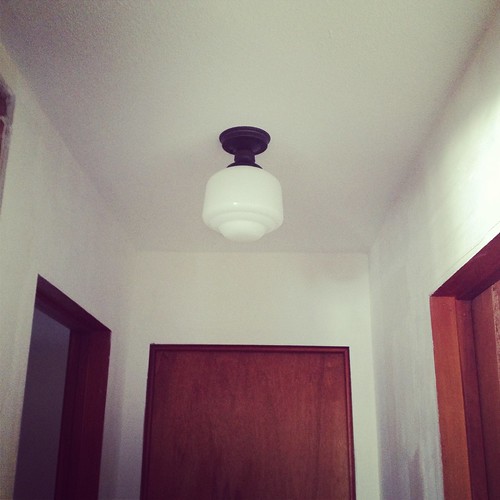 I wasn’t adoring the subway tile in person that I found online at Home Depot but I did find this great schoolhouse light for the hall there (and our baseboard and casing) for maybe $30. Swear I had a picture of the old light but I am vomit-prone these days and won’t do that to myself or you. It’s an oil-rubbed bronze finish for now but will probably change with a little spray action. I like the finish more than I thought and am tempted to leave it but it will be surrounded by brushed/satin nickel hardware in that hall. Thinking of getting another one-the biggest version-for the kitchen. 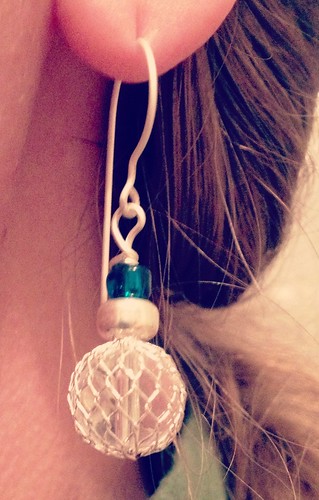 My friend Mindy in California made these awesome earrings for me! Love them and so sweet of her. She also made soap (yeah, she’s completely meant to be my friend) and gave me lotion of the “this makes me smell amazing” variety. And huge thanks to our family for the gifts and thoughts since we were again absent over the holidays.

We worked on a few other things but haven’t finished the details. I’ll just wait to share. But leave you with a picture of my cute husband working diligently on those details for his sicky wife. 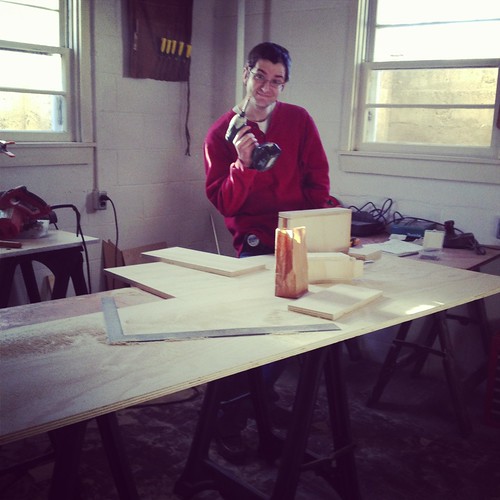 This entry was posted in Bathroom Projects, Lighting, Our First House Projects. Bookmark the permalink.