The weekend was a beauty. Weather was gorgeous, Greg’s birthday was lovely, we were productive on the furniture design front and Gold Rush Days was an experience we’ll remember for years to come. (The pictures throughout the post are of items I thought worth noting.)

Let me give you the scoop on our first experience at the Oronoco (Minnesota) Gold Rush Days. This year was the 40th anniversary of the antique show and flea market with something like 400 booths/1200 vendors or so I read. It was bustling but not overly crowded when we went. However, we overheard a number of vendors say there were still plenty of booths available and that it wasn’t as big as years past. There was talk of pricing for booths as well. The website says $100 for a 15′ x 15′ or 15′ x 20′ lot for the 3 days but someone else said it was $125 to $150 for a 10′ x 10′ in an area that was hard to get to. I tell you this because we went mostly to see if we could be a possible vendor next year. And inspiration. (I thought we’d come home with a few things but can you believe that we didn’t bring a single thing home?)

We arrived on the first day about an hour after the market had opened. Cars lined the small town’s road…because they didn’t want to pay for parking. We parked in someone’s yard for $5. Friendly workers guiding our way (mostly kids). The entire market was on “someone’s yard.” It takes over the entire town. Greg kept commenting about how messed up the yards were going to be with all the vendors setting up shop and many with large vehicles on soggy ground. But that’s how it goes. Anyway, we walked a tiny bit and were enveloped in antique furniture, some residents wisely had a garage sale going on, there were food vendors (most not open until almost lunch time and quite expensive…$5 for a lemonade) and a decent sized crowd.

My favorite booth was the first one we went to near the parking area (wise maneuvering, vendor) which lead to slight disappointment for the others. The first one set the precedent.

They had a great selection of unique furniture and decor in this first booth and it wasn’t obnoxiously displayed. Meaning you could get to an item without having to remove a ton of other items just to see it. So their staging was great. I’m not a fan of layer upon layer of merchandise stacked on pieces. Their prices seemed spot on and even though we arrived only an hour after opening, many of the pieces that caught my eye had a sold tag attached. Not that we were into purchasing any finished furniture or decor. 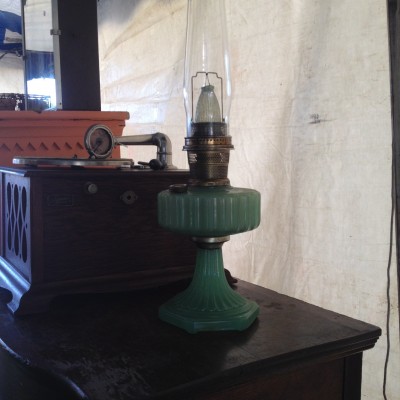 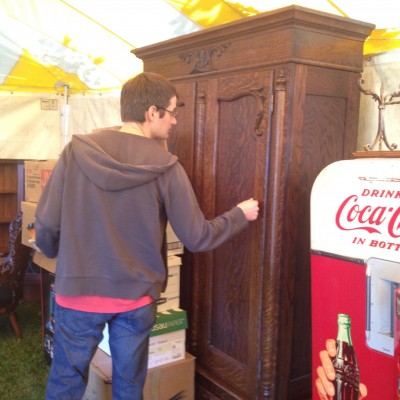 That said, we didn’t see a whole lot of items we could both afford and that were ideal for our salvaging. Everything started to look the same-same style, same faux oak finish, we started counting the number of small items we continued to see throughout the booths. Some pieces were priced way off the grid. Sometimes 3x what would be reasonable. Not really the place for mid-century or more retro items like we were hoping. A number of things I’d already seen on craigslist. 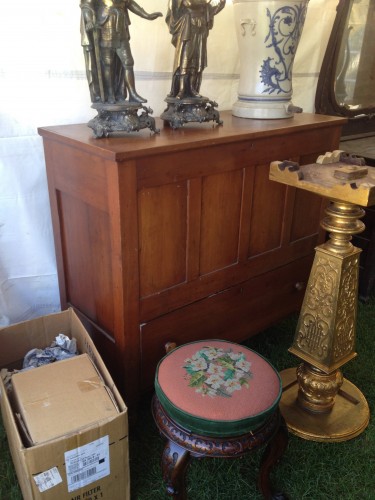 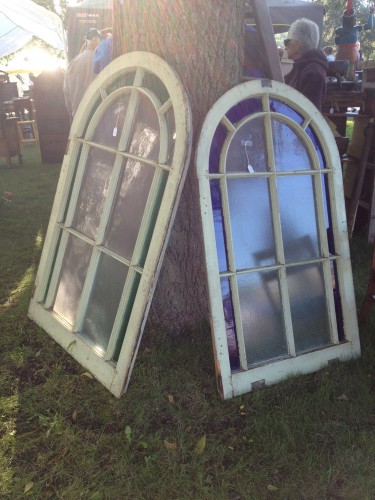 But there were some really cool items priced right. As pickers, diggers, collectors of vintage and antique items alike, there was really no finding something to put in our shop. I don’t think many people could walk away saying “I got a great deal.” Which is ok because this is what most of the vendors do full-time and they need to make their money like the rest of us. It just wasn’t the dream flea market I remember from other events. For someone looking to decorate their home in the shabby/cottage style, with the cash to do it, it was probably a dream come true. 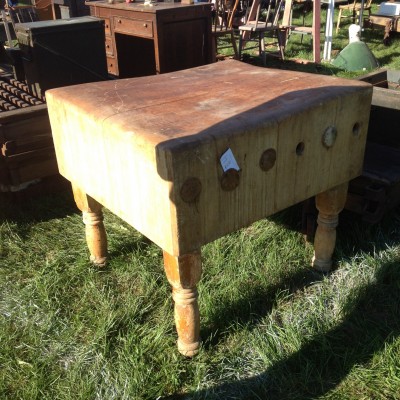 There were some things I really enjoyed about the market.

1) Many of the vendors were on trend (not that you have to be) with colors, style, decor. Parts were great for inspiration and I ran to a few items just to get a glance at their beauty.

2) Some vendors were creating pieces on the spot-like lighting and signs. It was nice to see the artist showcasing their process and creativity. 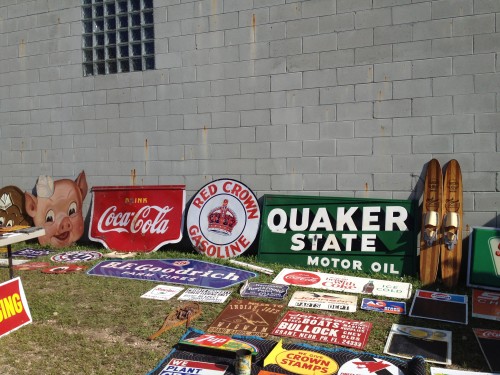 3) Haggling. I know that it goes on at flea markets but due to the scope and hype of the show I thought there wouldn’t be much of it going on.

4) Friendly workers. You could tell that it was a big deal for the town and that they took pride in being a part of it. The kids especially.

5) The number of vendors. Even though we didn’t purchase anything besides food and drink (and parking), we were there for 4 hours.

But for it being the 40th anniversary we hoped it to be put together a tad better.

1) Not enough “bathrooms”…porta potties but not many and they had a truck come to “clean them out” so that the crowd had to move off the road-smackdab in the center of the market and it seemed like it was following us. We bought an overpriced pizza and went to sit down at the only tiny picnic table one food vendor provided and the poo wagon came through to collect right by it…(oh yeah, lack of seating for people to eat). There was one bathroom you could use in the town hall with 3 stalls. For a large crowd of ladies that made a long line. And they were almost out of bathroom supplies when I went in in the morning. Yipes.

2) Traffic-as in the roads (where the event was going on) were still apparently open so cars and visitors would have to move and be cautious of moving vehicles, some were vendors rolling in and out for some reason or people that lived in the town which seemed ridiculous. A boat went through attached to a huge truck. Greg wondered if that driver wished they’d known a large flea market was going on along their path. Suck.

3) Food was not very affordable beyond one vendor. He knocked down the price of my nachos because the cheese warmer was somehow unplugged and it was cold. So I had cold nachos but was ok with them at $1.

4) People brought those carts that took up the entire walkway. I didn’t see how someone would use those things anyway since 98% of the items were breakable or too large to fit in it. I can’t tell you the number of times the flow was held up by someone with that cart. Oh, and with that, small walkways and booths situated in valleys so that you had to walk up and down the grassy hills/gravel. I was surprised that some vendors placed items right on it which spelled trouble with their furniture falling over and being damaged. Many patrons were elderly and not able to see a number of the booths. I did hear a vendor say the aisles were smaller this year causing problems for traffic and people wanting to visit some booths. But I understand that’s difficult having it in a town where the yards have those small hills and valleys.

Overall the experience was a good one and we loved getting to hone our skills and knowledge of our craft. It felt good walking up to a booth and having a good idea of the item’s worth and understanding of the wood, style, era as if we know what we’re doing (apparently we do). It felt even better being around people that love what they do and have it show. We also drooled over a new-ish sprinter van with a gleam in our eye that meant we know our time to get one is coming up…which makes us feel like we’ve arrived and we’re all business-like and professional…haha. And aren’t events like this showing, for a small furniture refinishing business couple, something to aspire to. For that feeling, we’re grateful.

After the flea market, we headed back to Northfield where we went to several garage sales. I’m pleased to say I didn’t leave empty-handed, finding more clothing than anything that might interest you lovely folks. (Ladies, I picked up a new, never worn, Vera Wang jacket for $3 that hugs in all the right places and you know how fantastic/rare that is to find.) 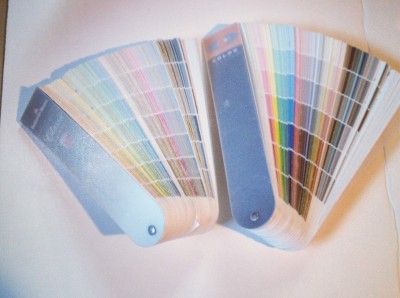 But wait, I did too. These Benjamin Moore paint sample fan decks for $.50. Nice.

For those of you concerned about Henry’s snip snip surgery recovery, he’s resting…just kidding, he’s the same hyperactive pup as ever and I snapped this pic because he hardly ever does this during the day.