Guys, I’m getting more and more excited.  The kitchen is slowly coming along. Can’t tell you how much I love taking something ugly and inefficient down. Demo is the best.

I’ll show you through photo .

For those following our Ikea-using journey for the kitchen reno I’ll tell you that we ordered the cabinets and whatnot on a Monday at the store (see that link for the Ikea experience we had), scheduled delivery for Sunday (Easter even), they called and said they were going to be in our area Wednesday (2 days after ordering) so we said sure, bring it on over that day.  Ich bin impressed.

Ikea hires the delivery part out, so what I’m about to say isn’t completely reflecting poorly upon them. That sounds bad, huh? I mean sure they use the company and you expect them to be responsible for who they choose, but again, I’ve read a number of horror stories regarding people receiving their Ikea kitchen from a lousy shipper even though they had nothing but great customer service from Ikea.

And looking back, this wasn’t awful at all-not even close to the other stories-and the delivery guys were very nice, even wanted to hire us since we actually helped unload. Guess we were only the second people they’ve ever met that assisted…sounds pathetic to me. Help them out, people.

The bad part was that, okay we said bring it on Wednesday and set up a timeframe from 5 to 9 for delivery…at 2ish they called and said they were 40 minutes away. Uhh, what? Greg had to leave work early to meet them and he was about the same distance away.

I bet the guy I spoke with on the phone the day before, who had me on speakerphone and I hate…which is why I imagine him for some reason leaning back in his chair with his arms behind his head, just chillin’, making the daily customer calls when I said we won’t be home until 5. Surely he made some rude gesture like yeah right, lady, 5 to 9 then winked at someone in the office then went ahead and stamped the paperwork with a 1 to 5 timeframe and hung up after assuring me that would be fine. The next day, same guy left me a voicemail that said they were on their way (early) and if we couldn’t be there or weren’t there we’d have to schedule another day and time….which had me yelling at the voicemail “you mean like Sunday? our original delivery day?” Good thing we were on the ball and had the house fairly organized to even get it stored. Now the pictures. (There’s more info about our Ikea kitchen after the pics.)

Putting them together.  Does not involve a yellow squeaky ball…unless you have a dog or two that think “mom and dad are trying to do something so I must be all over the place to help” 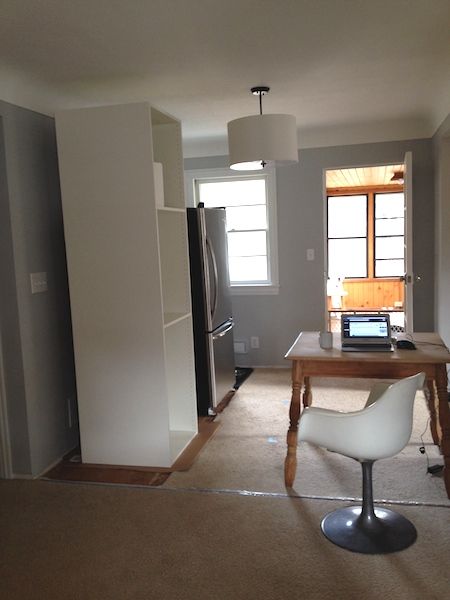 Flooring arrived shortly after the cabinets

produced this mess for the new pendant light.

This side came down, a few weeks after the other side of the kitchen

As it looks today…like 2 minutes ago today

Pocket door-to jog your memory.  See this post from the past about what we’ve done to the kitchen before the big reno.

We were told we had a small load by the delivery guys compared to the Ikea kitchens they usually haul. We do have a small galley kitchen and our design lacks upper cabinets on one side (except the one above the fridge). As soon as the delivery truck was gone, I began checking to make sure we had everything. The delivery guys said we had 5 days to go over everything and underlined the number to call if there were any problems. That whole check-everything-before-the-truck-leaves bit was false in our case. Phew. Everything was there and no damage. There might even be a few things we can return if we don’t open them. We shall see.

It took us 3 evenings and 6 hours to put together a 36″ x 39″ upper cabinet, 15″ x 39″ upper cabinet, a tall 24″ x 88″ pantry cabinet, and 5 base cabinets of varying sizes. Greg was very impressed with the process and quality.  If you pour the contents out in a certain way from the box they practically put themselves together. Due to the numerous other bloggers whose posts I read about putting together Ikea kitchens, I thought it would take longer. 6 hours and 90% is done. Nice! One very helpful tip would be to have a screw gun so you aren’t doing it all by hand. I could see how that would take forever. It’s great to have in general anyway. We use it for every.single.project around here….yep, every one.

As you saw, the cabinets are just sitting in our master bedroom waiting to go, some cover panels are leaning against the wall in the living room (by the flooring) and the tall pantry cabinet, as you also saw, is by the fridge in the dining room. That photo is misleading because that’s the clean version. The now (dirty) version is full of food and everyday items we had in the kitchen along with a shelf we brought up housing our cookware and dinnerware. It’s a mess like I said last post. It’s been this way for weeks and will most likely be that way for weeks to come. We’re on drywall repair now, folks.

Speaking of flooring, we got the lovely maple…which I guess meant we also bought a pallet because the guy said it was ours since he wasn’t waiting for us to unload all of the flooring. It took us 5 minutes to get the 246 sq ft in the house. Oh no, not 5 whole minutes!

Now if you’ll excuse me, I have to continue scraping off old glue and wallpaper. Because this 1952 kitchen has seen at least 2 paint colors and 2 wallpaper motifs, perhaps 3, in its time and the previous owner painted over the wallpaper. Also, the cabinets were a pain to take down. Also, also, do you like the salmon pink shade and the now very open layout? I’m digging it. The kitchen has never been so big and open.