Call me a slacker blogger and add slacker photographer in there too because I’ve only captured a handful of moments in the last few weeks.

We’ve been working on getting all the doors and windows painted instead of doing it as we get to that room as we had been doing.  The plan is to get before and after shots of each room (without furniture if I can work it out) when it’s totally finished.  Fingers crossed in a month. 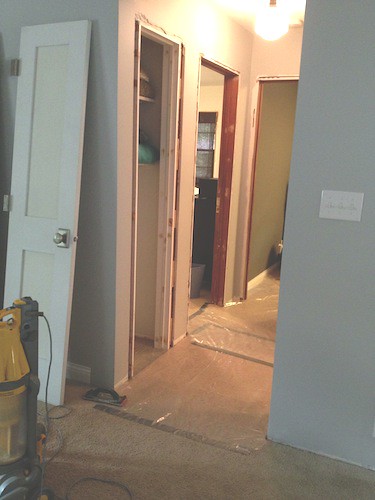 The house is looking maahh-velous though.  No more orange, warm tones everywhere and old feeling.  I’m shamelessly admitting that our bathroom door is a blanket right now though.

We only have 2 bathrooms and a kitchen to update, new floors to put in, get the carpet and ducts cleaned, do something with the stairway to the basement and touch ups to do.

I sit looking in the direction of the 3 season porch and cringe because we have no plans to improve it…and it needs help.  I still don’t like it overall even though it’s been helpful housing the pups during projects they shouldn’t be present for.  If we were going to live here longer I’d rip it off and put a bigger patio in, maybe French doors in the dining room. 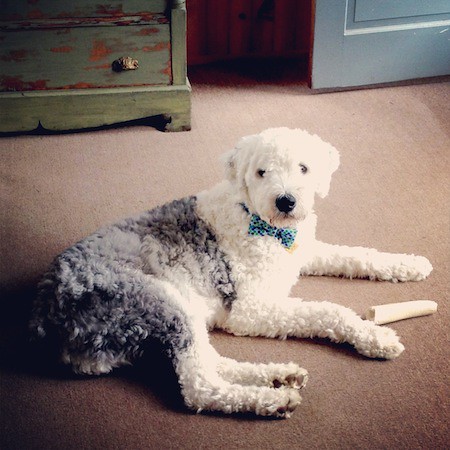 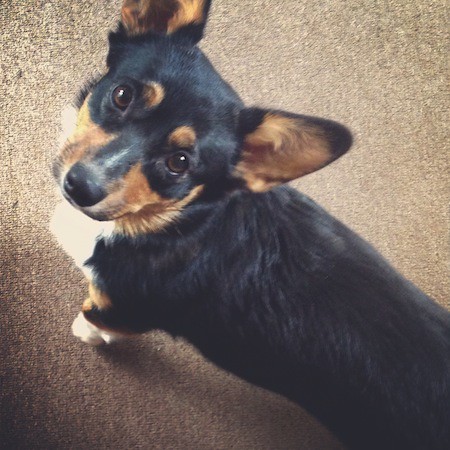 Much like I wanted to do more for the exterior but won’t get to.  We did put in a lot of time outside to get it to this point-with a new patio in the breezeway between the house and garage-so that will have to do.

The attic has a beautiful new entrance that I’ve not really shared because I’ve been waiting for the trim.  Oh well. 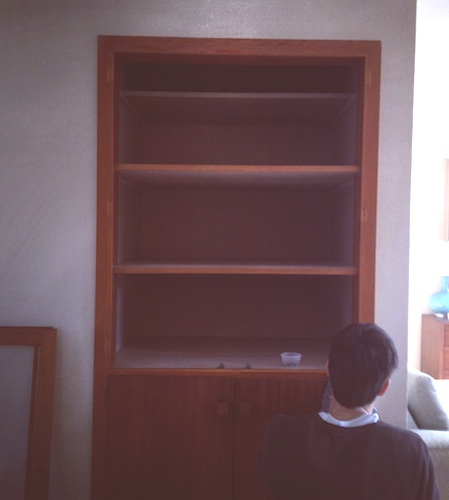 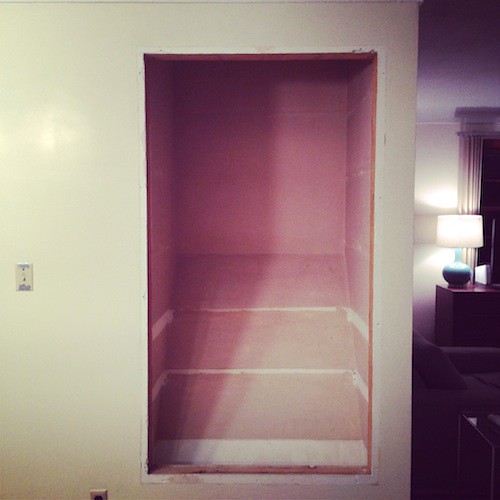 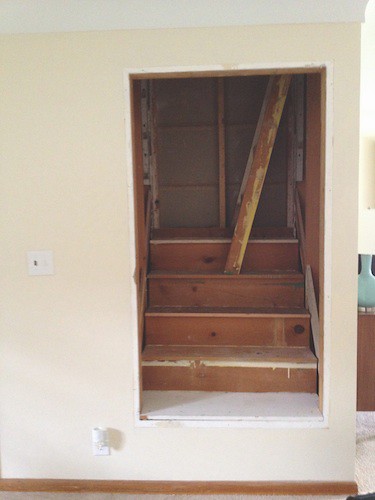 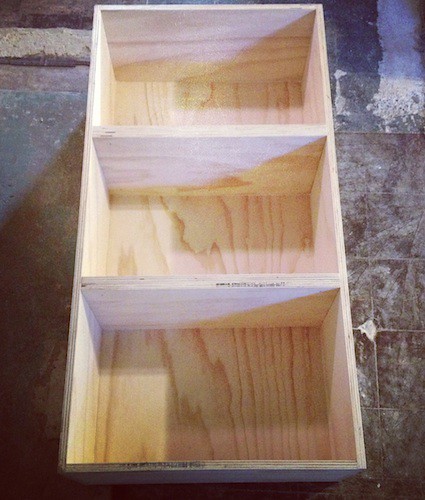 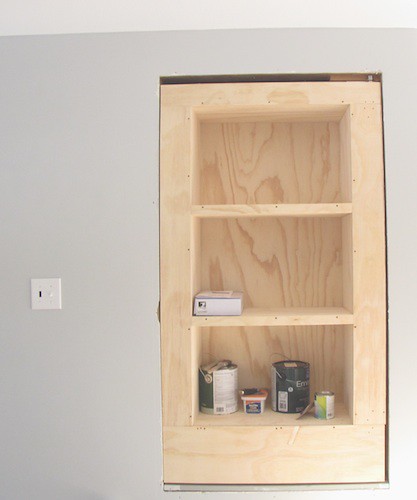 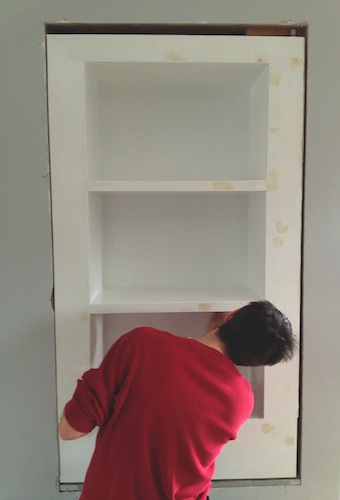 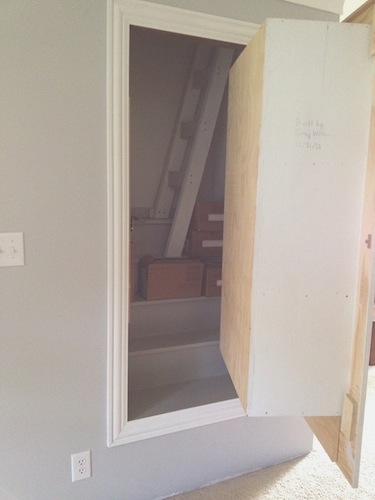 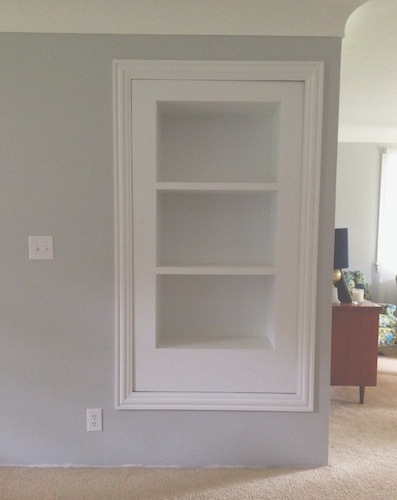 But here it is and yes, it’s a hidden entry to stairs to the new, large attic entry (that we added lighting to) that looks like shelving between the dining and living room.  You push on the left side of the shelf to open the latch.  There was a lot of planning, math and an expensive heavy duty hinge in that baby.  We finished it a looong time ago and it’s been housing supplies for projects ever since.

All of these things, along with new doors and trim, will have to suffice.  All of this will have been done in two years’ time, mind you.  Here’s the list of things we have done and what we have left on our ‘House Projects’ page.

Anywho, painting the doors and windows is somewhat slow-going.   The paint is Benjamin Moore Decorator’s White.  Nice and crisp but not in-your-face white.

We’ll soon order the remaining trim and paint that then hopefully knock most of the upstairs out on that front over a weekend.  Then we can get back to the basement bathroom. 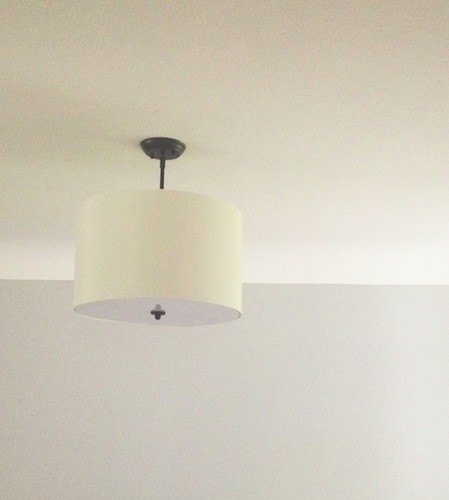 The orders we made are coming in left and right.  I think I’ve been dealing with customer service most days.  Part of the fun of renovating paired with my notorious bad luck.

Warning: the upcoming paragraphs are rants.

The pedestal sink I ordered turned out to be only the basin even though the discount company listed it as an entire sink.  After arguing with them for a few days I gave up and ordered a base with another discount company on Amazon.  (The basin, by the way, has slight manufacturer marks on it which I later found but I’m so tired of dealing with pick ups and scheduling returns that I will accept a less-than-perfect sink in my reno.)

Just yesterday I checked the shipment tracking to see the base was damaged and undeliverable and that I’d have to contact Amazon.  So, I did.  They can only refund the amount and asked that I buy another one using them as the seller and they would waive the one day shipping fee.   That ended up being $20 more than what I had paid for the first base.  I contacted Amazon like they said to have the rep tell me he couldn’t help because I apparently was responding from another email…I wasn’t.  I began a live chat with a rep who finally took care of everything.

The first pendant light I ordered for the dining room was not as described or pictured AT ALL and after arguing with that company about a complete refund (and getting nowhere) I am still waiting a week later for my money back…even though I am out the $35 for shipping.

The rep for that company first wanted us to drop it off at a Fed Ex location and show them the RMA number where they would create a return shipping label.  Well, Greg took it to our local shipping store that ships USPS, UPS and Fed Ex where they charged Greg to print the RMA number (?) that they were supposed to scan from his phone (in the directions) then ended up telling Greg they couldn’t do the return (they could and it’s why we have to drive 20 minutes to a reliable shipper in a town over these days).  That took 2 trips just before they closed and achieved nothing nor did they refund the charge to print which was for their own sake.  That blew my mind.

I was in contact with the rep from the light place all night just to get him to finally schedule Fed Ex to come and pick it up at our house.  The next nearest Fed Ex is 35 minutes away and not on a route we travel often.  The rep didn’t tell me when they were coming so of course it was when I was gone and I had to reschedule.  A day after they picked it up I received a call from Fed Ex saying they would pick it up the day before…that’s right, the day after what they had said/after it already happened.  Might need some improvements on that automated message system, Fed Ex.

The kitchen sink I found on craigslist is not white but cream which will not do.  Greg picked it up for me and didn’t notice (that’s my area).  The first sink I found on craigslist…sigh…contacted the guy who said they were remodeling in a few weeks and to get back to him then but that it was ours in the meantime.  Got back to him when he said they needed a few more weeks.  Ok, contacted him again when he somehow didn’t know who I was.  He said I could have it if I sent him a check (uhh no) or if I could wait another week we could come and get it.  Scheduled the pick up when he wrote back and said it had been broken when they removed it.  Back to kitchen sink searching.

All of these things happened in a little over a week and I’ve had other weeks and purchases just like this throughout this home improvement process.  Got any good stories of your own?  I could use those about now.

3 Responses to My Luck and Updates