The temp is on the rise (oddly) here in Minnesota so we took advantage and on a whim, took ourselves outdoors to start working on the yard.

We are still working on the studio and I finished that dresser I keep talking about…but I want to wait to show you since I don’t have a place to snap any decent shots yet. The new legs for the tufted couch we picked up a few weeks ago arrived, are primed and have a coat of spray paint on them. The tee nuts (hee-hee I’m mature) we need to attach the legs are lost, by Menards or Fed Ex, and the customer service person has yet to update me on their whereabouts. 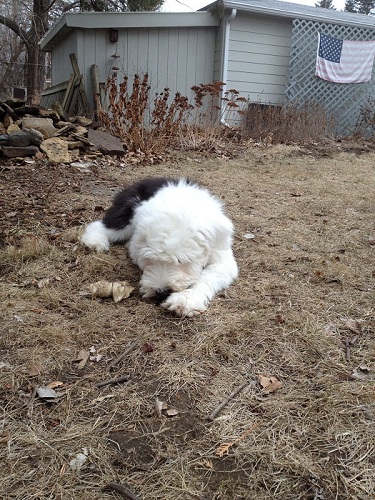 To the yard. We had no plans to start on it for at least another month, after we had more finished inside, but it was so nice out and highly unusual for this time of year, we just had to get out.

I focused on digging up the landscape rocks from around the yard. They were everywhere and I’m still not finished but 8 hours later and my back/arms were done. Greg spent his time raking, trimming some branches, sorting and organizing the leaves for a nice compost pile (thinking about getting a bin), then tackling the trellis (we took the decorative fence out first thing that day).

Let’s discuss the rock issue. I’m giving them away to whomever shows and loads. They used these sharp rocks everywhere, making bare feet a thing of dreams (I would be barefoot all year round if I could) and these rocks lined the landscape plants/areas. So not looking forward to removing all of those and taking on the front yard. We did cut the Christmas lights off the shrub that have probably been stuck there for quite some time with the mechanism they had keeping them in place-a broken handle and wire inside the shrub. Snip, snip, pull and they are gone.

Once I started digging out the rocks, I noticed that there was a second row spanning the entire yard just under the grass but still poking out enough to make it a problem. Those had to go too. They used them to contain the ivy-like ground cover around some trees (that ivy has to go) as well. Just everywhere. I’m still finding it in random places. Aggravating.

I know the trellis and fence might have looked cute and decent in the before picture but it had a major impact on how our yard functioned. It’s a rather large backyard but you couldn’t tell. We’re more grass and open area people than what it was…random plants, wood chips (why have grass when you can put chunks of wood everywhere), dead trees (to be removed soon) and unkempt, shady areas that got to be as natural as they wanted with saplings up to my torso taking over.

But back to the trellis. We really tried to keep it intact like we did the fence. And Greg worked carefully to dig the posts out but once he came to the last post, we noticed it had been buried in a coffee can. We also noticed there was cable running to the house at one point but had been damaged when they put the trellis in. Why fix it, go without and make the next owners not have a clue and have it installed again, right?

The coffee can made it near impossible to pull the post out which put pressure on the other post, causing it to break. Upon pulling all the posts out, the entire thing just fell over and broke in several other places. We ended up demolishing the thing, pieces behind the shed with the fence now. Exhaustion and anger might have been a factor. The rain rolled in and the holes needed to be filled so our patience kind of ran out with this task. It could be put back together but we see no use since we were going to sell or give it away. One rose bush was hurt in the process.

Henry was so helpful too. Running around like a mad dog with a dirt mustache. He’s now allowed to roam the yard as long as he stays around us. When it gets warmer, and we can fit it in the budget, we’d like to put a fence up. That would be great since the college guys that rent the house next door sat and watched us most of the day from their patio. I’m sure they lost it when I stepped on the rake and knocked myself on the forehead. Seriously happened and I have a bump above my eyebrow. Greg had a nice chuckle. Who puts a rake by the stairs? (I did.)

I also wonder what the other neighbors will think since we’ve met a few more and every single person that comes by tells us how they are friends with the elderly woman (the previous owner) and how she had a lovely collection of plants, mostly roses. It’s also nice when they tell us how different the house looks when literally the only room they have been in has not been touched and only our furniture has been added. I have a feeling the nice couple next door, that we gave a key to when we went to Indiana a month ago, took a self-guided tour, saw the mess downstairs and the hole in the wall where the attic entry is going and started talking with the other neighbors, maybe even reporting to the previous owner what’s going on. Young couple “ruining” the house you know. But they are nice. I bet the backyard reno is the talk of the lane. We met the neighbors behind us, over the fence, and they seemed appreciative of the clean up and renovated their house too so could understand the process. I love this place.

This entry was posted in Before and After, Our First House Projects and tagged backyard, compost, fence, house, landscape, plants, roses, studio, trees, trellis, trim, yard. Bookmark the permalink.

7 Responses to We Moved It Outdoors