It has begun…garage and estate sale season!  Well, there was one this weekend and I hadn’t a clue until we drove around our neighborhood and saw the sign.  Like Ace of Base sing.  It opened up my eyes and brightened my weekend.  (I know those are not the lyrics by the way.)  It was more of a mid-century sale too which we’re totally into.  (Did you add “like every other person on the face of the earth”?  I don’t blame you.)

We bought this chair for $20, the exact Ikea Grundtal mirror I already have and wanted to put in the basement bathroom and get a second to keep.  (Blew my mind.)

It was $15 and had some residue (that cleaned off) but I probably could’ve haggled. I found 2 cookbooks and another paint by number piece of art which I really like too (the one on the left-the other was from our favorite local store).  They are crookedly hanging up on the wall in the basement studio.  As you can see.

The woman having the sale said she would have more next weekend (!) and also tried to get me to buy some hideous curtains that she thought I’d like since I liked the chair.  They were bad, folks.  I kindly passed. 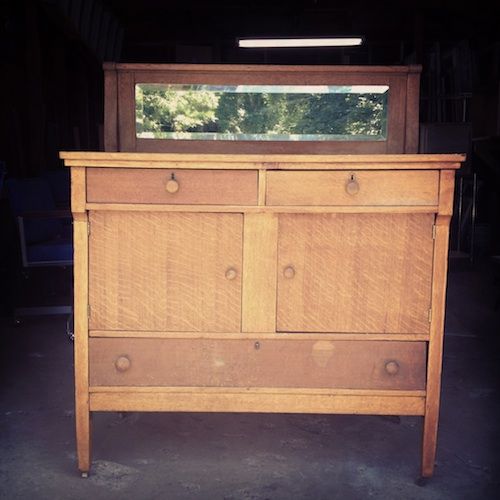 We brought the sideboard outside with the warmer temps and sunshine to sand (so it wasn’t even 50 out…so what, who cares).  We then brought it to the master bedroom which, if you regular readers remember, is really the guest room/office/workout room right now.  We had no intention of working on the sideboard over the weekend but the veneer (almost $100 worth) arrived earlier than estimated so we got to work.  It’s a challenge to replace most of the veneer on this antique and that’s Greg’s specialty so it resides in that bedroom for the remainder of the project.

The 3 season is empty of furniture in need of salvaging.  One goal met.  A very nice woman came to pick up the antique dresser with 2 friends and a local couple grabbed our Windsor chairs.  The sideboard, antique Martha Washington sewing cabinet and Lieutenant Dan are all that are left.  We deed indeed bring up the dresser we refinished (the one in this post and I forgot to snap a photo before we put all the veneer project mess in that room so I’ll show ya later).

Oh, and we worked quite a bit on the “short dresser” and it’s almost finished.  I did a little spray painting action on some knobs and once it gets one more coat of paint and some matte poly it will be ready to go.

I’ve been very happy working on furniture in place of the house projects recently and wish we could continue that path.  But next weekend we’re back to painting trim and putting up some base.  I’ve been dreading that as has our checking account.

Hmm what else?  Uhh Vivi ruined not one but two of our loofahs in an hour, two separate occasions, without us hearing a peep then she got a bath as punishment.

And finally…my links show up as different colors on this blog!  Found the correct lines in the code that worked this time and none of the 10,000 times I’ve tried before.  I see them at least.  Right then, see you next time.

One Response to Surprise Estate Sale