I documented the process, in case I would ever need to prove that I actually did something crafty beyond furniture overhauls, of some DIY décor. Admittedly, I made it because I was curious and thought each idea, seen on Pinterest, was awesome, not with the initial plan to have it for my studio workspace.

I took these free paint samples, that I cut with a 1 ½” circle punch, a piece of cardboard and some glue and made this. 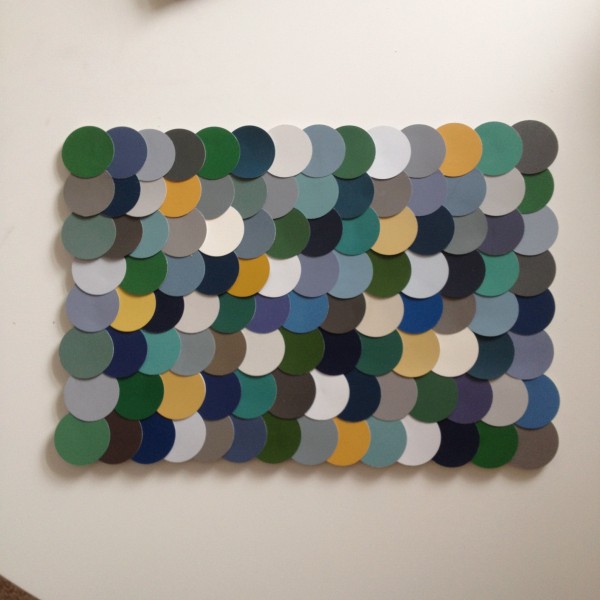 No, it’s not finished and this particular thing serves no purpose but to look snazzy. I intend to frame and place it somewhere in the house. 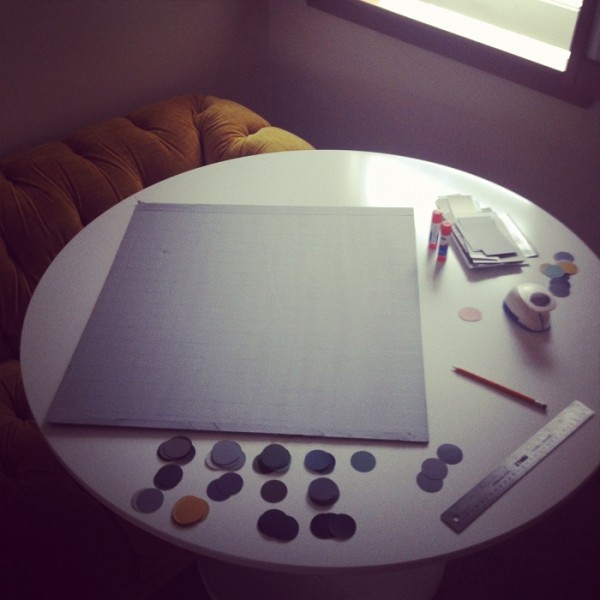 Then I used the leftover circles to pin on the real pinboard I made (not the Pinterest one this time) since the colors inspire me. 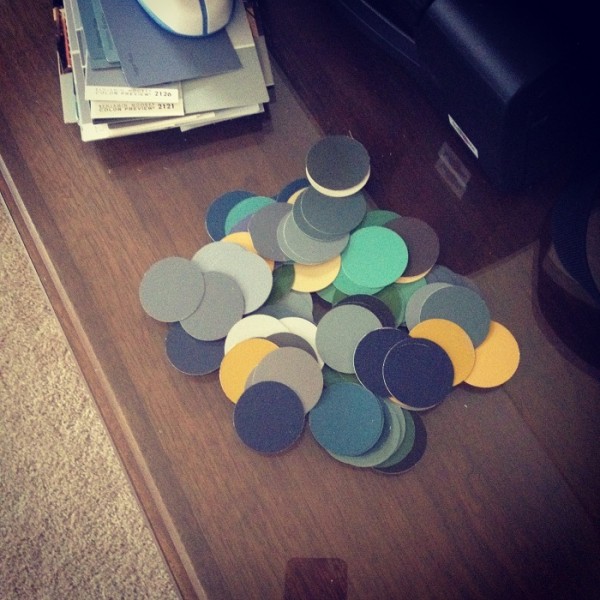 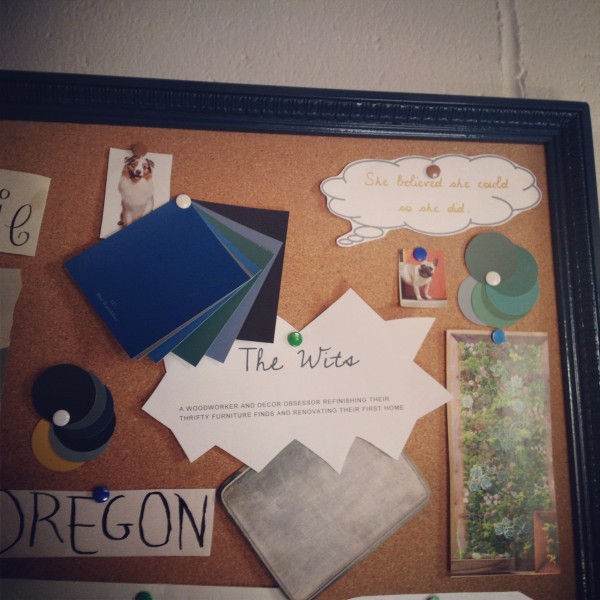 I also cut the free samples into tear-shaped pieces with the intent to put it around an existing, bare chandelier in our bedroom but then I found the Urban Outfitters shade and came up with a new idea (that remains to be completed since we have ceiling work and painting to do first). 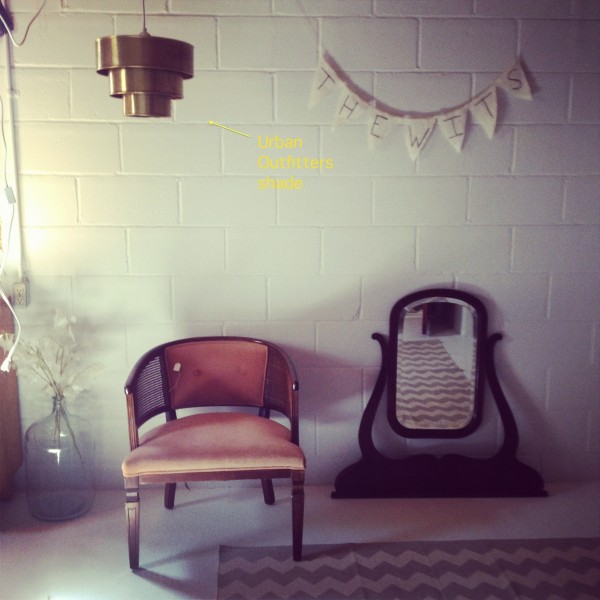 So, the tear-shaped pieces, after some brainstorming, were to become a mobile for the corner of the second bedroom…but, and this is normal for me, after purchasing the rods and materials, the mechanism fell apart and I was so over it so they sat on a dresser top where I keep my sewing machine (used to be my mamas) for months. But then the studio came along and I saw an opportunity to tape these babies around that bare light fixture (and yes, no “real” ceiling). Nothing inspiring but it fills my heart with joy that they finally found a home. A temporary one because I’m giving the mobile idea another shot…someday. 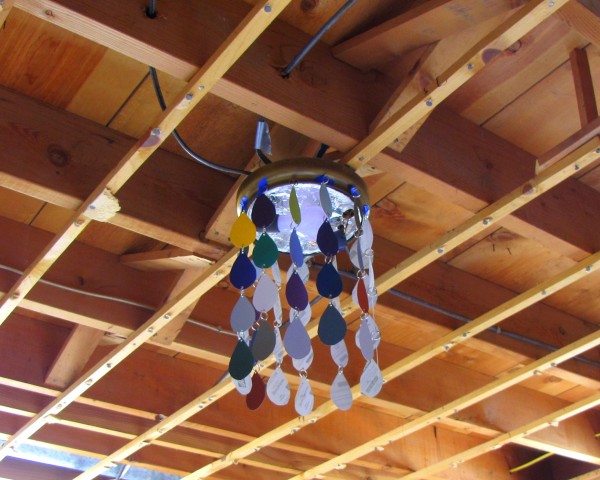 But really, I’m seriously bad with most crafts. I’ve always been the one to organize, research and plan something with the vision I had, then delegate the tasks if any skill had to be involved in the world of crafts, sewing, and such.

The Poms are from an etsy seller called Pom + Love because I know on the day I made these and shared them with my facebook friends, a number wanted to know more about these. You can make them yourself but like one point of this post says, I’m not really very good with crafts. I can show you that I made this and this and this and these then this but I do not consider myself an authority on the craft subject. Don’t ask me how I’m good with the furniture thing.

I’m not saying this to be ironic either. I’d be the last person on the craft team picked. They’d be like “aw man, she can’t even cut straight” and I would mumble “I can if I have my tongue sticking out…” and my voice would trail off from being hurt then I’d saunter over to join my team while they walked away from me in disappointment. I’d probably try to fain a positive outlook and high five people to be ignored. And I’d be all “I’ll show them” and then there’d be a montage of me ruining everything. Snipping the wrong thread and the entire project falls apart, me in the center of a huge crocheting mess with the hooks and my arms trapped at my side in the jumble, and an entire minute of me just trying to pick up tissue paper without tearing it. I get carried away but I do envision things like this then stamping the word ‘FAIL’ on anything I touch in the crafting world.

I’ve got the plans, I just don’t have enough skill or maybe it’s patience. I get them confused when it comes to things of this matter. I ask my mom to do some things for me. Now she’s talented.

On the very same day I made the paint sample art, I must have gained some confidence because I grabbed ahold of the cardboard letters (find them at JoAnn Fabrics) I bought weeks before and took my (some were free) samples of wallpaper and put them together. Not all willy nilly-like.

I’d actually made burlap letters months before which is the day I realized how much I hate burlap. Burlap should go to that place where bad fabric dies.

Anywhosal, letters with fabric and wallpaper. Ta-da! You trace, cut and glue then stick ‘em wherever you’d like. On a shelf, on a dresser, on the wall, in a nursery, child’s room, adult’s room, kitchen, dining or living room, on a plane, a train, a boat…how’d I get on a boat? Never dreamed I’d be on a boat. Watch the adult language and material on that video I linked to which is hilarious. Wonder if they’d like a wallpaper letter or have ever made one?

I’ll be back to show you one more DIY project we did for the studio later this week…although I’m having difficulty transferring and adjusting to the new imac (of course we got a good deal on it from an Amazon seller) we got to replace our dead laptop. I spared you the technical post that I had brewing in my head full of words like back-up, Carbonite, Google Docs, Applecare Protection Plan and support, OS X Lion, iphoto and icloud (crying/yelling/frustration). All things we’ve had issues with in the past week since moving the show on the road to an Apple once again. (I had an ibook in college then we got a Dell from Greg’s brother when that became obsolete.) The day our pup knocked the wine on the laptop was the day I spent hours organizing and writing several posts for each blog, along with documents filled with ideas and directions I wanted to go with both blogs. I was feeling pretty good that day until “the incident.” Our back-up did not do its job then it was gone and I only had the chance to grab one document in Google Docs before it died for good.

Now I’m attempting to learn the iMac, organize and edit my pics all over again, find other docs for our personal use, back-up the new and obtain things from our old which is taking forever and get back to where I was-efficient and organized-before the spill.

Then the in-laws are coming to visit in a month (that’s a thing we’re looking forward to), a garage sale needs organized, the backyard is finally rid of all yardwaste bags, brush, and the second clothesline post (as of this weekend) but we now have to pull every single weed and sapling/plan the layout/fix the outdoor plumbing/do something attractive with the walkway between the porch and garage since we removed the ivy and it just has dirt right now, then indoor projects are about to continue, the budget needs to be gone over, appointments for potential customers need arranged for our current inventory (some are not on the public market yet), two dressers need our attention and a million other of life’s things need attention.

Driving me a little bit crazy and weighing on my mind. But I love it. 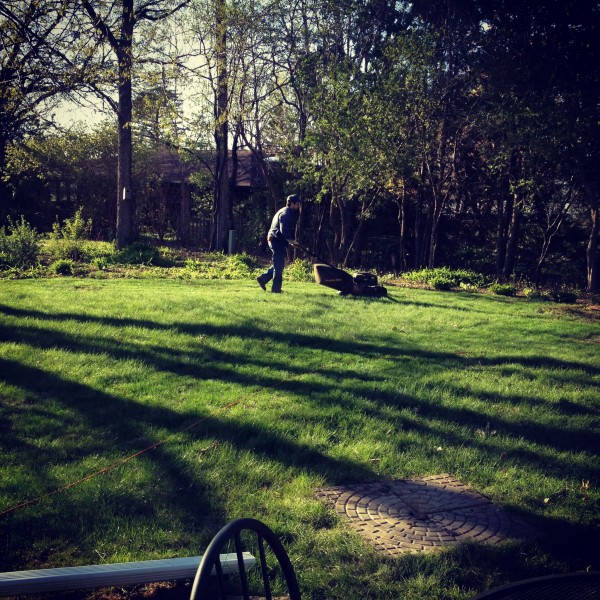 Oh, and we mowed the lawn for the first time in our first house which sounds silly to announce but you know that feeling-one of those small steps that makes you feel all warm inside.