I spent some time yesterday researching, yet again, the best gray paint that will soothe my sore eyes. Earlier this week I told you about the gray gray walls being actually a blue shade somehow. Hmmpph. Not the stuff that dreams are made of for this woman.

Instead of going to the store to face the employees again, I ordered 8 samples from the Benjamin Moore website (free shipping on orders $75 and under until the end of the month I believe). I can let them come to me and give myself time to cool it on the walls. (I also spent time yesterday putting the samples back up that we got to begin with and not a one is going to work. Just to be sure.) 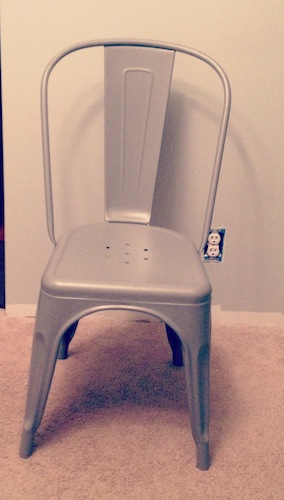 On to other issues. For over a month, I’ve been trying to find the perfect dining table on craigslist-something more Danish, modern, contemporary, narrow and not too large, or something unique. I considered (never found one) a long, vintage farmhouse table to go with my eclectic idea since I have 2 metal-based tulip chairs and that free Tolix chair Greg got me…which I think I only mentioned on our facebook page last week. Oops, yeah, free Tolix chair for me. I’d been looking for an affordable one of those too-free is affordable. The company his company purchased had one at their facility and they were just giving away the old furniture. (Greg said nothing else was worth it.)

Anyway, really I was just looking on craigslist to see what tables were available. You might think the reason ridiculous. Lighting change. In order to get an idea of what I’m doing style-wise, the old table had to go. Since I can’t get rid of the horrible carpet, I needed something to better show the direction and lighting combined with table did it for me. (Our beige carpet is my nemesis.)

I didn’t think the tulip table was cutting it. Have I ever told you about that? Don’t think I did. Well, we bought it from a young woman in Minneapolis. I asked her in an email if it was the Ikea version, the real deal or another reproduction. She said no on Ikea and that it was from a store down the street from her apartment that her boyfriend picked up. I know the area and thought DWR which we love. So, my notion was that it must have been a quality piece once quite a bit of money. Sure there was a little damage. I asked in person if it was the Ikea version because, at that time I didn’t stop and see what that one looked like as I would today to be sure, and again she said no. We went to Ikea shortly after that day and what do you know, the damn table is Ikea. 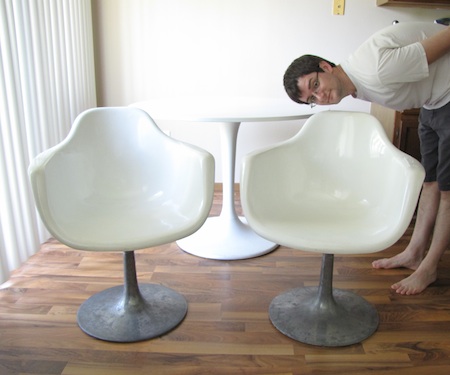 Now I don’t have a problem with the company (as you will see later in this post) but I was in the market for a more collectible version (again, nothing is wrong with that table!). But I was pissed, for $10 more we could have purchased the Ikea one new. I wanted to go back and demand my money but we didn’t. That was a while ago when we hadn’t started salvaging and refinishing furniture. We chalk it up to lesson learned and sometimes craigslisters suck.

So, new table because I want new lighting in the dining room. New lighting that I decided to make. I’ve been dabbling in design for lighting since we moved in the house but I have no experience and not a really decent base of knowledge. Trial and error, the inability to find the parts and supplies I want to use and a general confidence problem has prevented me from sharing. No zippy zappies yet. I feel like I’m getting some of it right but I’ll put it this way, we have a lot of light parts sitting around and I’m not sure the majority will be used.

Follow this-found a pendant light used in a budget room makeover on a blog I came across (sorry I can’t remember which one right now), asked where she got it, was told West Elm but it’s no longer there. Started searching for it on ebay and craigslist to no avail (when I get my mind stuck on something I drive myself crazy trying to attain it…and we usually end up making it, keeping the idea on the backburner or convince ourselves it’s not worth it…which is rare), meanwhile I found another West Elm pendant light no longer sold and began looking for it too.

I liked the idea of combining some of the parts from both lights to make my ideal pendant. Then, like kismet, Emily Henderson (one of my favorite designer/stylists) did a post on a $.99 hula hoop pendant light and all 3 of these lights began to become one in my mind.

I had a good idea what I wanted to do. 1) Make it myself 2) Use something a slightly better quality than hula hoops (although that’s freaking genius) which is where 14″ wood embroidery hoops came into play. We made the outer fixture but then I found a mini West Elm pendant on ebay and thought the globe would be perfect inside…and a week later, it was. I also plan to do similar lights in different finishes cause this gal likes options.

BUT, get this, being a mini version, requires a tiny candelabra bulb that not only doesn’t give off much light (should have considered that) but is not meant to go upside down. What? That’s how it was sold but it says right on there don’t hang it upside down, the bulb that is. So you get a pendant light that can’t have a bulb in it without changing out the socket and by then this lamp would be ruined so why not just make your own. I was really not happy to realize this this past weekend after all that work. It doesn’t look right with the cord and socket conversion kits we bought to just have an empty bulb, even though I bought and already have cool Edison bulbs and dig the stark bulb lighting thing going on today.

Needless to say that is not going in the dining room but in the second bedroom with my new idea. Because this will be used and this new idea also uses items I purchased for another project that didn’t come to be due to similar issues. No wasting things in this house.

The original, early thoughts about lighting stemmed from the sparse fixture in our bedroom. We took off the hideous outer portion and left the 3 bulb portion. Every night I looked at the thing with disgust and kept imagining what I could do to it. 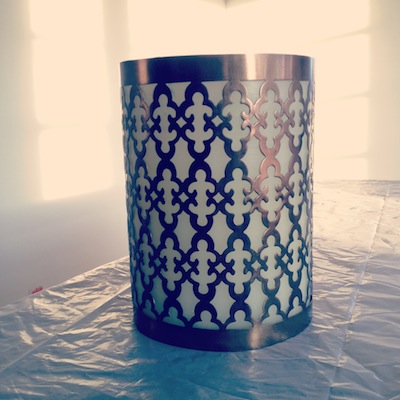 A few weeks ago, I was getting some holiday decorations out when I grabbed my large hurricane candle I bought years and years ago on clearance at Target for like $8. This thing has traveled from Indiana to Minnesota, from apartment to apartment to finally this house. The decorative portion slides off the candle and amazingly has these 2 metal pieces that allow for it to be attached to something else. Something else like the 3 bulb fixture and the size and scale just worked like it was always that way. 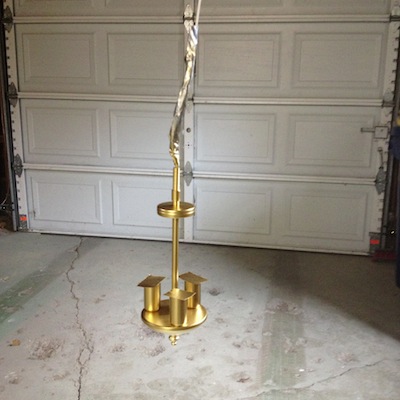 I spray painted the 3 bulb fixture with this amazing Rust-oleum Metallic Brass spray. Love the stuff. Then together and up the entire thing went and the design will go with the pulls I intend to put on the closet doors once we get those up. I will get some brass up in here after all. Boom! 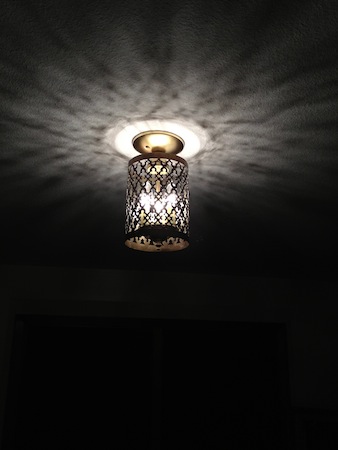 Because I got the idea stuck in my mind to change up the dining room and because I do have a temporary pendant in mind (to be shown later) and because I couldn’t find what I wanted and because these days I’m obsessed with making my own pieces, this table came to be.

Found the top on craigslist (the guy’s wife changed her mind about their island being this solid walnut and they sold it for less than half what was paid to the custom Minneapolis butcher block company that made it) and we bought these legs at Ikea. See, I do love me some Ikea. It’s ideal as a desk and works for our small dining room. Now that we have created it, I think we’re going to put it on the market…to help the holiday spending and billz (yes, with a z). I’m going to design a slightly different table for our dining room. Probably something a tad wider than the 27″ this one is at. I do love it though. 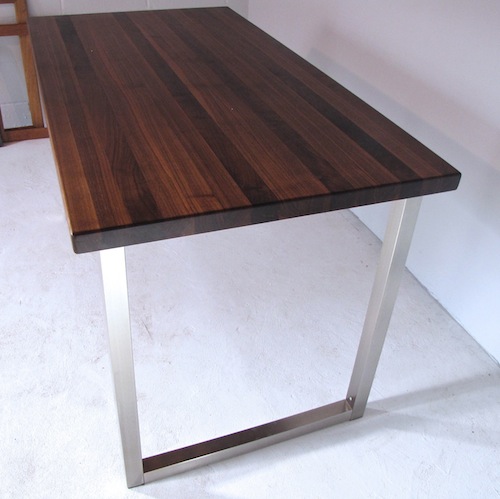 When we can make our own table legs and tops in our dream workshop, we’ll have more of our own stamp on pieces. The future!