Letting go really helps. Allowing whatever comes to come, let it linger even, saying I will take some time away from certain activities to just enjoy what I can and deal with things one at a time is refreshing. We still have yet to address technical bloggy issues or dive into updating anything with our new host. (I’ve neglected my food blog for quite some time.) We’ve only touched pieces we’re redecorating for the filmed documentary being done about us and that was just to put the new legs on the thing to give a better idea of our plans. It sits awaiting some attention to one drawer-the only drawer left to do-before we can send it on its way to our staining and painting process (in the same room but whatev).

Letting go turns out not to be so good for keeping organized or getting things done though. I really can’t remember what I’ve shared and what I want to share. Today is the kind of day where I just looked at my recent photos in my photostream and said, yep, that’s gonna have to do. If I didn’t capture the occurrence in a photo I often don’t remember to share that activity. Here’s a rough overview of the happenings. The hippin’ and the hoppin’. 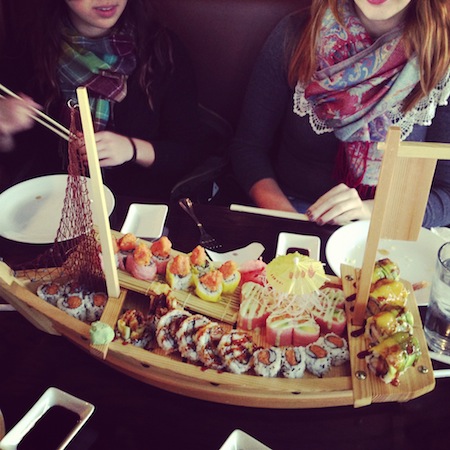 For one, the visit from my sis-in-law and her friend was great. They were such wonderful guests and the filming of the short documentary was easy. Don’t know why I was so nervous. It’s in good hands. We also paused to be decent hosts and did a small look-see at the Guthrie Theater, took some time to dine out and just hang. So chill I just said hang…and chill. Thanksgiving was spent just the two of us (and the 2 dogs so 4), working on the walls, with a small dinner of roast chicken and potatoes like I wanted. 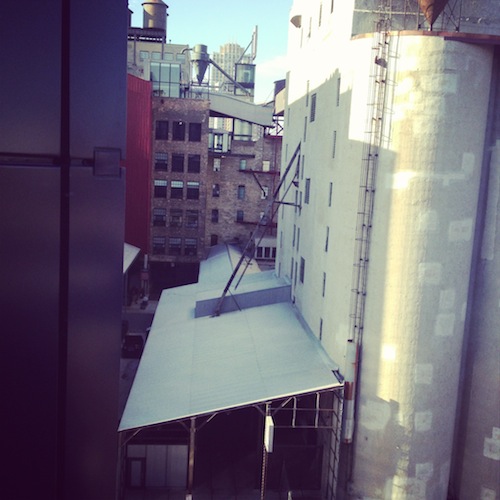 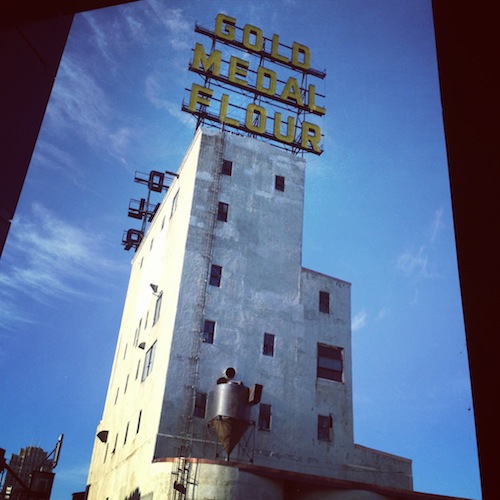 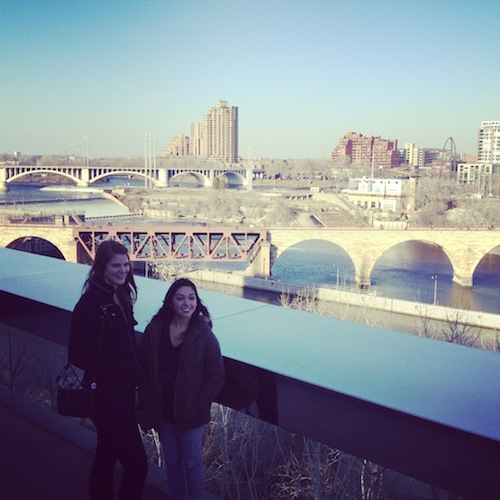 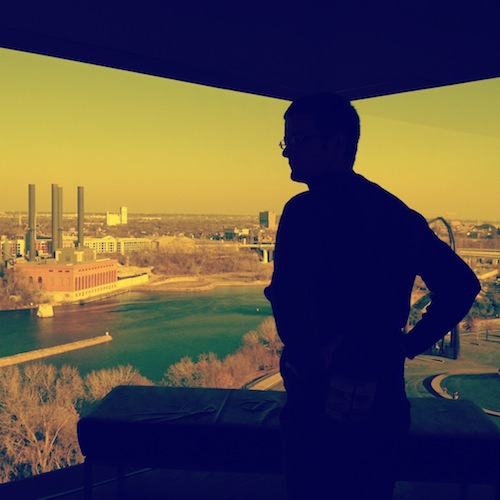 Greg was hit with an awful cold a day before his 4 day break…typical. He took one day off of work making it 5 days but when you’re miserably sick who is counting? We didn’t accomplish much until the last few days and our anniversary Saturday was awesome. Not just because we decided to go ahead and take the trim down in the living/dining room and hallway but also because I found a Building Materials Outlet not too far away and we made an afternoon looking around which still wasn’t enough time to take in all that amazingness. New go-to place. 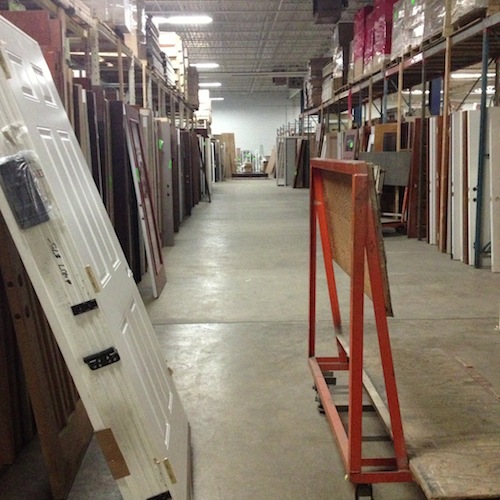 We’re seriously thrilled to have come across the place. It’s like a dream. For reals. If you are able to travel to Eagan, Minnesota, stop by. Get there early, you’ll need the time. I was so giddy that we found 6 doors for the entire upstairs for $350-we’re talking the majority being solid, 2 and 5 panel, unfinished (we’ll paint them or take them to a local automotive place to have them sprayed) beauties. One of those doors would be somewhere around $125 or more. Happy anniversary to us! 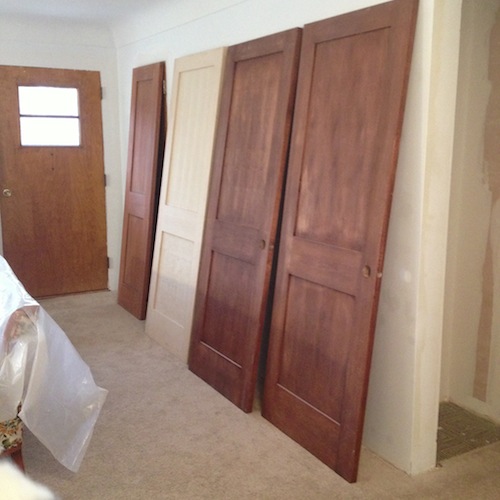 The hilarity was us getting all 6 in our Subaru Forester-the only vehicle we have and we don’t know too many people here to assist us. Four doors are 30″ x 80″ and the other three are 24″ x 80″. I ended up sitting behind Greg, smashed in the car for the 40 minute drive home. But obviously I was in a state of bliss because I proceeded to take 10 pictures of the doors and myself from the backseat (a friend said it reminded her of the movie Titanic) and a few of the back of Greg’s head in a strange way of documenting the momentous occasion. I strongly dislike being in pictures so it was a big deal. 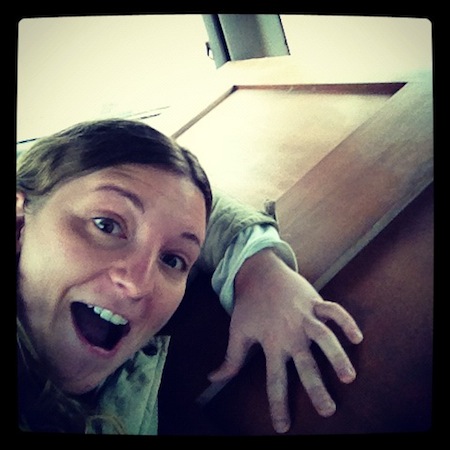 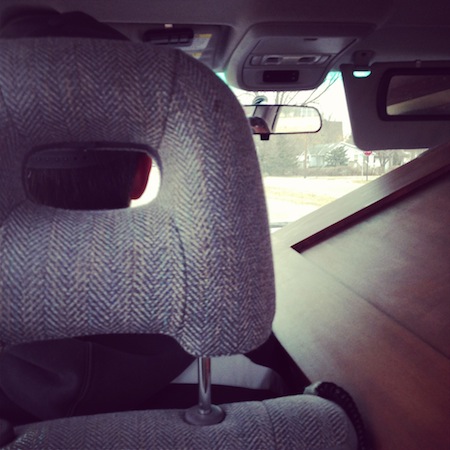 And maybe we had a little tift on the removing of the trim topic over the weekend. I remember saying we should take it off from the beginning, when we started repairing the walls, but Greg made some point that I can’t remember so it didn’t happen. Somehow it came up and we decided to go for it this weekend which meant more spackling, mudding, sanding, cleaning, etc.. But we’re glad we did. The room looks bigger without trim and made repairs easier. We intend to replace the trim…maybe. I’m researching trimless options. Do people do that? Trim is one of those topics I never thought about until we bought the house. I’m next to clueless. I’ve got bits and pieces going on.

I’m also at a loss for door hardware. Put a piece of furniture in front of me and I’m full of ideas for knobs, pulls and handles. Put a door in front of me and I’m all hinges…door knobs…huh? I have no idea which route to go. I’m loving me some brass, not the super shiny bright stuff but “antique” or brushed. However, the rest of the house will be done in what I believe is the most appealing to the most peoples, satin/brushed nickel as seen in my Pinterest board. Oil-rubbed bronze would probably look nice too on the white doors. (We intend to paint them white.) I just don’t think overall it would work or maybe you can mix finishes which I’ve seen and liked but it’s difficult when keeping in a certain price range and working with limited options while trying to keep a classy appearance. Keep in mind we’re going to be selling this place hopefully in a few years. Is that the case with satin nickel? Am I crazy? Also keep in mind this is the Midwest and while I have that little voice in my head saying make yourself happy and go with the brass then I think about our potential buyer and want to be safe.

By the way, the living and dining room walls are primed, have their first coat of paint (in love!) and will be finished this week. We weren’t going to but then we noticed some discoloration on the ceiling so that got a new coat of Benjamin Moore ceiling paint. When that went up, I performed a happy dance. Such a difference. Fresh and clean and matte. My favorite. 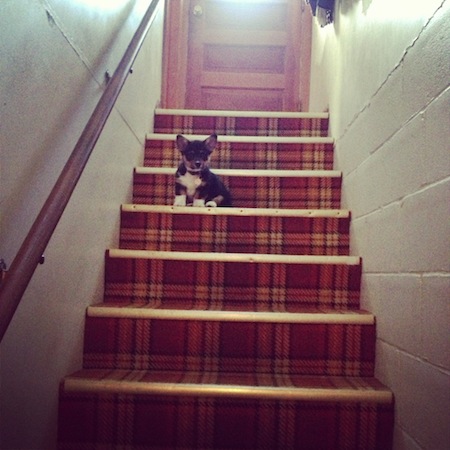 Other accomplishments this weekend: Vivi, our 12 week old Corgi pup, learned how to do the stairs. Plus, we started on a pendant light idea and if it goes well, I’ll share later. I still need to share my parent’s renovations they did in their house. Incredible. Incroyable!

One Response to Incroyable!