Whoa, it’s October. Like the month with Halloween, Breast Cancer Awareness and Columbus Day. True story. When I was in first grade we celebrated Columbus Day with fun activities involving pretending we were on the Nina, Pinta or Santa Maria (the ships) on the playground with funny paper hats. The teachers-the people I trusted- also told us to celebrate the holiday, the queen herself would be coming by. And in first grade and being a huge royal fan, I was an ecstatic child. Can’t tell you how crushed I was when it turned out to be one of the teachers dressed as the queen the following day. Still not over it.

But anyway, my favorite month is over-September-and we’re rushing through fall and into winter. Only not really at all because the weather is glorious here in southern Minnesota. In the 70’s, a few times in the 80’s, and it makes me believe we won’t have snow in the forecast this month like we’ve had every single October we’ve lived here (4 years). Snow on Halloween is as crushing as believing the queen is coming and getting an impostor.

Also true is that the leaves are brilliant and beautiful this year. One letdown has been how blah and muddy-looking the leaves have been the last 4 years or how quickly they fall from the trees. They are still up and looking simply mahvelous. I’m sure we are one good wind away. Until that burst comes, I’m glancing out our large, front window every chance I get. I think I’ve looked at the vibrant reddish-orange leaves across the street more than the tv. 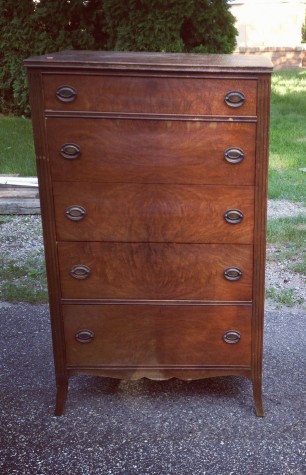 I desperately wanted to have a dresser to show you today. The project had the making of a super easy transformation. Then came the bleeding. The stain someone had used on the tall chest of drawers and not us. Of course it appeared once we put a coat of heavy chalk paint on it. At $46 with shipping for a quart of the stuff (which we love), it was not a pleasant experience realizing we only had 1/4 of the can left to do the whole thing after priming. The drawer fronts have been done for nearly a week with no bleeding issues. You supposedly don’t need to prime or sand or really prepare furniture with chalk paint (even though we do). This one oddly required primer after we sanded and filled the entire body (for repairs). It’s been kind of a bummer though. So much for a quick makeover. Well, as quick as a piece can be fixed with water and veneer damage. 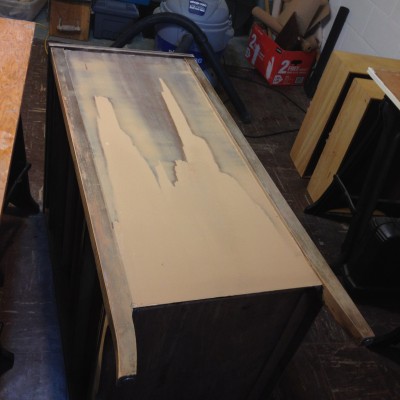 What we didn’t expect was about 5 coats of primer on the body. Each of those times we’ve allowed it a day to set so it’s taken 5 days just for the priming. I should mention we don’t normally prime a piece but you’ll see why at the reveal. 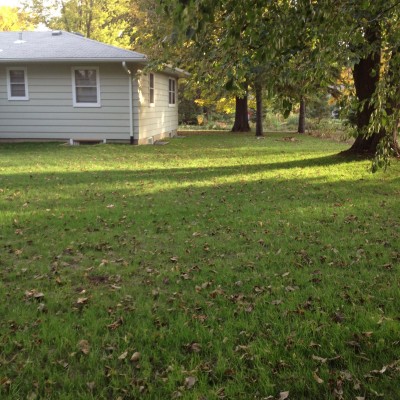 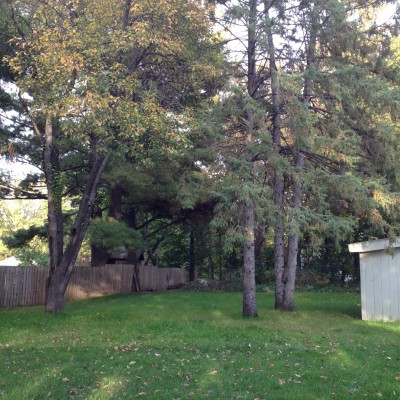 I have an update on the yard. The grass is…well, it’s somewhat there. Let me put it this way, we’ll be working on it some more in spring. 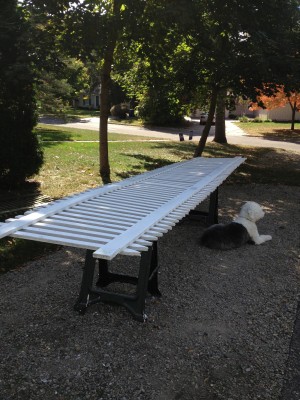 We also finished painting the fence. That was just an time-consuming task we did when we had time to kill between coats of primer. The fence was left by the previous owner. We took it down when we removed the set up in the backyard, have been storing the 36 feet of picket fence behind the garden shed and since we can’t afford the fence of our dreams, we decided to paint it white and slap the 3 pieces up by the property line (so the next door student renters are not visited as often by our dog). Plus we’re waiting for the utility lines to be marked. 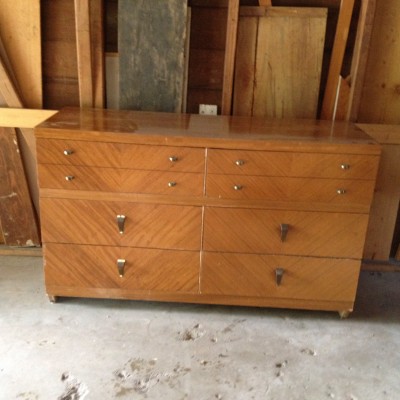 Greg and I sat down yesterday to plot the October house renovation plans. Some exciting things will be going on in the house. Yes! And I’m pretty excited about another dresser we’ve been working on besides the priming problem from hell. I’d say it’s one of the most “redesigned” pieces we have done to date. Something I envisioned when our friend showed it to us in his garage and then gave it,as in for free, to us. If all turns out as planned the style will be the opposite of what you see above or vastly different. 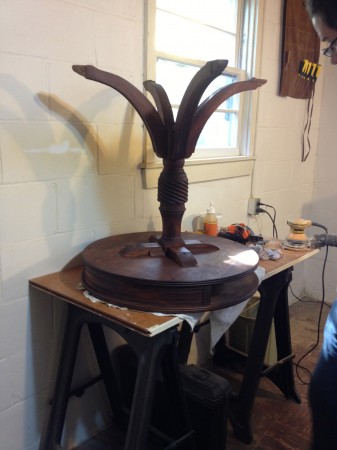 Oh, and we stopped by a garage sale in town over the weekend. Just happened to be that the home owner was moving and in need of repair on her antique Duncan Phyfe-esque table. She said it had been damaged going on 20 or 30 years, just sitting in pieces in the garage. Greg assessed the damage, brought it home, glued it back together and reinforced it with some screws (with permission) and brought it back the same day charging just $20. Easy stuff. They are going to pass along our info to their pals who could use our help repairing their antique furniture. Funny how we walked into a garage sale and came out with a job, then a recommendation and helped to make someone’s day. She said she should have garage sales more often. Unexpected and nice.